The Construction Blockchain Consortium (CBC), whose members include IBM, Siemens, Alpha Corporation, Scape Group. Turner & Townsend and the Linux Foundation, yesterday published a case study about how IOTA Can promote transparency in the supply chain of micro and small businesses. The case study was carried out at UCL ( University College London ) and focused on a project implemented in the retail industry by CBC member Blocks and Mortar Limited.

The project was for retail e-commerce startup, Revolution of Forms, implemented and designed a traceability solution based on the public IOTA Tangle to track sales of products on the company’s website. The customers were able to view the product data directly via a web explorer in order to check the origin of the purchased item.

An IOTA based traceability solution for handicrafts

Like the study determined, the lack of transparency among producers and manufacturers is a great opportunity for Distributed Ledger Technology (DLT). Smaller handicrafts companies in particular have to struggle with imitations and forgeries because, according to the study, “there is currently no reliable system for tracing the origin of products or materials.”

With the help of the solution developed at UCL, every physical product from Revolution of Forms could be provided with a digital recording that proves its authenticity and origin. The IOTA Tangle technology was given preference over other DLTs for the following reasons:

IOTA Tangle was used because it is a transparent, end-user-friendly application. […]

This project was carried out as part of IOTA Tangle mainly because it is a royalty-free distributed ledger technology. This met the needs of the customer who was concerned about the cost of paying transaction fees on an alternative blockchain (e.g. Ethereum), especially as their business scaled and the number of records to be registered increased.

A web-based application (“Provenance Record Entry Form”) was developed for the implementation in which all information has been entered. This automatically saved the information in the IOTA Tangle via an open source JavaScript library made available by the IOTA community.

As the following figure shows, were the data is saved in 4 steps on the Tangle. In the first step, the details of an order placed with a designer were processed using MAM (Maskd Authenticated Messaging, now IOTA Streams) recorded. Then, when the product was finished, the artisan entered the product details. Once the designer has received all of the products in an order from each artisan, he also checked that the order was complete. When Revolution of Forms finally received the order, the data was saved again in the Tangle using MAM. 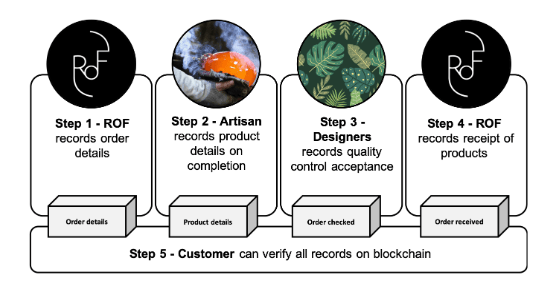 Ultimately, the customer was able to view the data records on the Tangle by clicking on the unique ID for the order, which he called up on the product page of the “Revolution of Forms” website.

Finally, the case study also found that other DLTs, such as Ethereum , Cardano or specialized solutions, such as Everledger, enable a similar function:

However, it is worth noting that alternative public and private distributed ledger technologies such as Ethereum or Cardano are able to implement similar functionality. In addition, there are now commercial solutions designed specifically for tracing the origin of goods by using blockchain along with related technologies (such as nanotechnology and smart labeling such as NFC). Everledger and Provenance are two such commercial products that are typically used for higher priced items such as works of art, valuable gems, and luxury goods.