Former Morgan Stanley Asia Chairman Stephen S. Roach recently made a shocking prediction in an article about the future of the US dollar. Roach stated that the dollar fell 4.3% in the final quarter of 2020. He believes the currency could depreciate by 35% by the end of 2021. The expert described the USD as “the most overvalued currency in the world” and examined the resulting effects for Bitcoin .

Roach attributes the devaluation of the US dollar to 3 main reasons. The first is the loss of the US population’s ability to save. Roach believes the United States is in a period of “rapid economic decline” exacerbated by the COVID-19 pandemic. According to the expert, the national net savings rate is negative at -1% in the second quarter and shows a decline of 3.9% in the first quarter. The last time similar numbers were recorded was in 1947, and the expert expects that number will deteriorate due to the phasing out of unemployment benefits in the country.

In view of that Roach stated that the annualized US federal deficit was $ 5.7 trillion in the second quarter of 2020. During this period, the deficit increased by more than $ 1 trillion to allow injections of money into economic aid for the US population. The total U.S. deficit in 2020 is $ 2.744 trillion, as shown below. 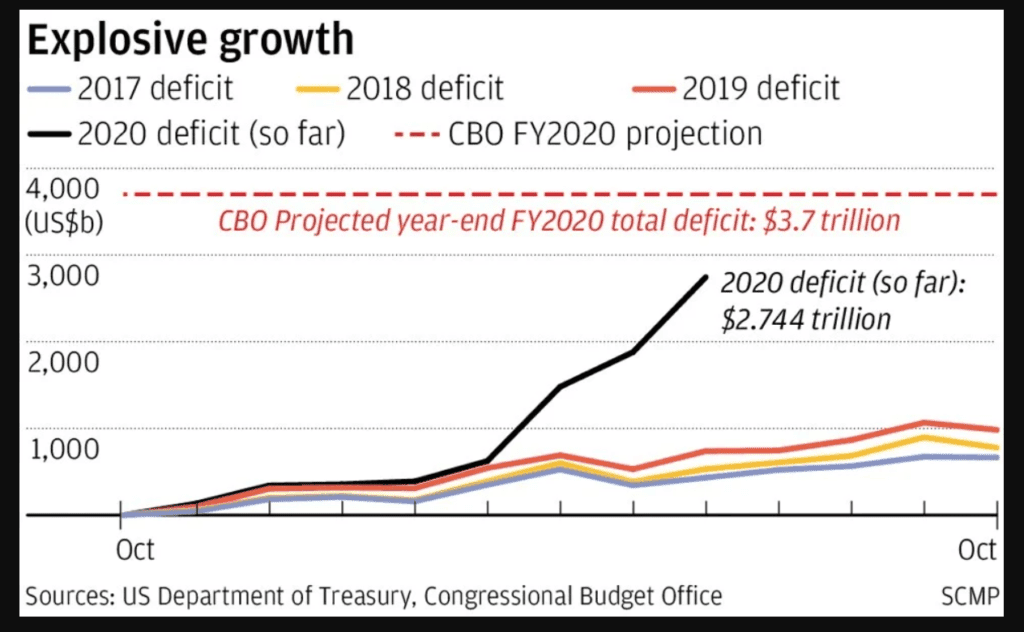 The expert also advises that the Change in monetary policy the Fed has put negative pressure on the dollar. The institution has opted for a strategy that favors “average inflation” and therefore will keep interest rates at zero for a long period of time, according to the expert. This rules out an “important option,” said Roach, to moderate the dollar’s decline. Additionally, Roach adds:

Powered by the explosive The increase in the federal budget deficit this year and next, the collapse of domestic savings and the implosion of the current account are likely to unfold almost at lightning speed.

Bitcoin decouples from the traditional market

Roach’s predictions could come true even faster. The US Democrats yesterday put a new $ 2.2 trillion stimulus plan , which provides for the revival of the $ 600 federal unemployment benefit by the end of January and additional stimulus aid.

In this sense, the crypto Market did not react positively to the new economic aid announcement. At the time of publication, Bitcoin is moving sideways (-0.92%) and becoming at USD 10,763 traded . In the traditional market, the news had a big impact. The S&P 500 index rose nearly 2% after the announcement; Gold rose 1.06%.

With this in mind, several analysts have noted that Bitcoin has started to decouple from the traditional market. The analyst Willy Woo had repeatedly commented in recent weeks that a decoupling of Bitcoin from the traditional market is imminent. Woo believes Bitcoin is adopting its own “Curve of Holders”. This will be composed of the inhabitants of countries with high inflation rates and the new generations, such as Woo claimed :

At some point there will be a HODLer-Investor Squeeze in the ‘Whipsaw’ game, and the prize teleports up to a new technical setup and a new “correlation narrative.” “. This is your decoupling.